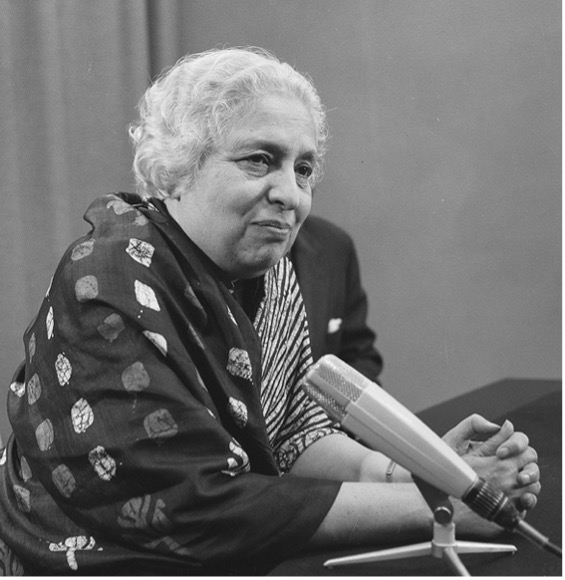 Out of the 389 members of the Indian Constituent Assembly, only 15 members were women. One of these women went to become India’s third ambassador to Ireland. The second of three children, Vijaya Lakshmi Pandit was born in 18 August 1900 to Motilal Nehru, an illustrious lawyer and his wife Swarup Rani in Allahabad, India. She was elected to the provincial legislature of the United Provinces and became minister of local self-government and public health- the first Indian woman to hold a cabinet post in India before independence. In her  book “So I became a Minister” published in 1939 she gives readers a glimpse into the contribution of women in the realm of politics in newly independent India-

… there are 44 women in the provincial assemblies, the majority of them in every province being members of the Congress party. They are interesting themselves in all matters pertaining to the welfare of the country, especially in matters concerning the advancement of their sex.[1]

Although she is remembered for becoming the president of the United Nations General Assembly, the first woman to occupy such a post, she also held a range of notable diplomatic positions. From 1954 to 1961, she was sent to London as high commissioner. During this period of time, she had also been accredited as India’s first ambassador to Ireland.[2]  She recalled her tenure in Dublin in her anecdotal memoir The Scope of Happiness, tracing temperamental similarities between of Irish and Indian people.

We have always been very close to the Irish people. There are so many basic and endearing, though possibly irritating, qualities we Indians share with them. I involved myself with Irish playwrights, novelists, and poets, and when I was in Dublin en poste my greatest enjoyment was a visit to the Abbey Theatre.[3]

Born to an illustrious family and bestowed with private tutoring by an English governess, Vijaya Lakshmi Pandit made the most of the opportunities she got. However, in her book So I Became a Minister published in 1939, she gives readers a glimpse into the dilemmas she faced on assuming a ministerial post at a time when only men assumed office. To compound the situation, she had no previous experience of administrative tasks. After going about arranging flowers to adorn her office the first day she entered office, she went about facing the large number of files on her desk-

How on earth should I tackle them? Evidently it was no one’s business to initiate me into the mysteries of reading a file. I better teach myself. I looked through them and chose one that looked less complicated than the rest and began to read from the first page. It turned out to be interesting- soon I was engrossed in it and by the time I had read it through, felt quite competent to pass an order.[4]

Vijaya Lakshmi Pandit’s contribution to the spheres of pre-Independence nationalist activism and post-Independence politics as well as diplomacy is noteworthy. When she died in 1990, President Rama Swami Venkataraman pronounced her a “luminous strand in the tapestry of India’s freedom struggle. Distinctive in her elegance, courage, and dedication, Mrs. Pandit was an asset to the national movement.”[5]

Pandit, Vijaya Lakshmi So I became a minister (Allahabad, 1939).

(Divisha Mohan pursued her undergraduate degree specialising in History from Lady Sri Ram College for Women, graduating in 2019. She completed her masters in Irish History from Dublin City University. She is currently a public relations intern at the Ireland India Council. Her interests include transcontinental connections, feminism, and gender history..)
Disclaimer: The opinions expressed in this article are the personal opinions of the author. IIC does not assume any responsibility or liability for the same.